Aregbesola, the Osun Defender, has been chastised by the group for accusing Oyetola of betraying the APC 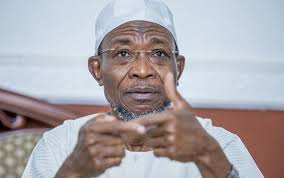 Former Osun Governor and Interior Minister, Rauf Aregbesola, has been chastised by a socio-political group, Osun Shall Rise Again, OSRA, for accusing Governor Adegboyega Oyetola of betraying the All Progressives Congress, APC, just because he reviewed some of the policies that nearly cost the party the governorship election in 2018.

The Osun Defender, a local community newspaper, published a story titled “REVEALED: How And When Oyetola Abandoned APC Programmes To Please Omisore,” in which it claimed that Oyetola’s policy review amounted to him abandoning the party’s program in order to appease Osun’s former deputy governor, Otunba Iyiola Omisore.

However, OSRA condemned the assertion as not only false, but also meant to deceive Nigerians, particularly those who live outside of Osun and are unaware of the situation on the ground.

In a statement released by the group’s Media Office, OSRA stated that, contrary to Aregbesola and his cohorts’ claims, all of the issues that harmed APC’s popularity and made it difficult for it to win the governorship in the run-up to the 2018 governorship election were addressed by Oyetola to the delight of Osun people, re-endearing the party to the people.

“From the repeal of half-salary to the reversal of single uniform and the reversion to old names of various schools, among other things, Oyetola has won the hearts of the people,” the group claimed, arguing that how such actions amounted to abandoning the party defied their imagination.

“Recall that during the governorship discussion, when Omisore was nowhere to be seen after Oyetola fought tooth and nail to defend the one uniform policy, he pledged to look into it again if the people wanted it looked into if he became governor.

“Again, Aregbesola had intimated that ‘Ileri would handle things differently than him.’ And that if there were any things he didn’t do well, the governor would work with the party to rectify the situation. Is it possible that Aregbesola met with Omisore before making the statement?

“Did Omisore have an influence on the reports from Mr Governor’s Thank You Tour and the UK DFID Needs Assessment exercise?”

“Rather than trying to slander the Governor, Osun Defender and Aregbesola should hide their faces in shame if they can’t commend Oyetola for helping to repair the party’s image in the state by being more responsible in governance, even to the acclaim of the opposition.”

“Everyone knows Oyetola was unaware of how the APC approached Omisore in the run-up to the re-run poll. “I believe Oyetola should be recognized for effectively controlling Omisore till he formally joined the party,” the group stated.