How A Riot Set Fire to a Palace, Two Cars, and Ten Motorbikes In Osun’s Igbaye Crisis 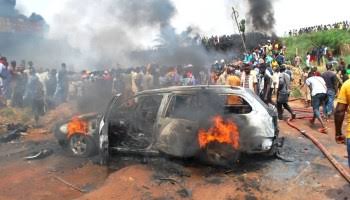 Immediately after the incident in Igbaye, a community in Osun state’s Odo-Otin local government area, a group went on the rampage, torching homes and setting them on fire.

The situation erupted following a dispute between Oba Joseph Okunlola-supporters Oni’s and his competitor, Prince AbdulGaniyu Oyenike, which resulted in the murder of one Hamzat, who was purportedly killed by a bullet fired by a security worker.

It was reported that supporters of Morounfoye, enraged at the murder of one of their kind, went berserk and set fire to the monarch’s vehicle, palace, and motorcycles in an attempt to avenge the death.

According to a resident, Rasheed Damola, the mob, largely Prince Oyenike followers, were attempting to avenge the death of one Hamzat, who was killed by a bullet fired by security officers while attempting to scare the mob away, while another is still in the hospital with a bullet injury.

“The scenario is best described as carnage, with people arbitrarily setting fire to properties.” The palace, two cars, and a large number of motorcycles were all set ablaze. “It’s dreadful,” he said.

Oba Okunlola-Oni, meantime, bemoaned the fact that he was on the verge of being lynched but for the intervention of security officers, saying that no monarch deserved such treatment.

“This is a sad situation; a traditional king does not deserve such violent and mob attacks,” he remarked.

Unfortunately, security agents have yet to make an arrest in connection with the palace’s destruction.

“It’s such a shame that no one has been arrested as a result of the incident.” Everything in the palace was damaged by the hoodlums. They set fire to ten motorcycles and the entire palace, including two automobiles.”

One thought on “How A Riot Set Fire to a Palace, Two Cars, and Ten Motorbikes In Osun’s Igbaye Crisis”