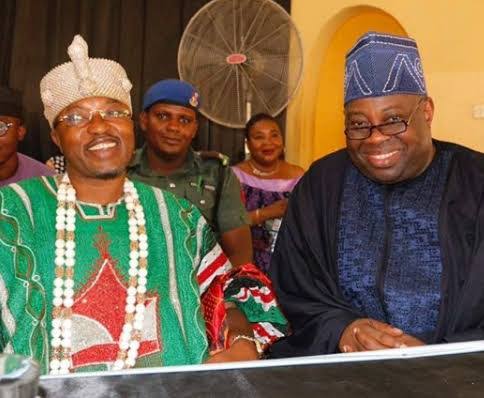 The Oluwo of Iwo, Oba Abdul-Rosheed Adewale Akanbi, the Paramount Ruler of Iwoland, has revealed that he received a spiritual message to bestow the Aare Title on renowned journalist Chief Dele Momodu.

He stated that the proclamation was a directive from God three years ago at Bowen University, Iwo, during an unintentional meeting with Dele Momodu on the campus of the institution.

Oluwo made the revelation today in his palace square, during the inauguration of Dele Momodu as Aare and his wife, Mobolaji Momodu, as Yeye Aare.

Oluwo, who is known for his eccentricities, stated that he respected the message to honor God in his remark. He stated that the manner in which God spoke to him was exceptional and serves as proof that Dele is a man of God. He revealed the divined message, which persuaded him to give up the title for free.

Dele Momodu, he said, was a disciplined man who grew up and maintained an honorable lifestyle. He charged him with using his position to promote development in Iwoland.

“Dele Momodu received the Aare Title through a divined but inexplicable circumstance. I was at Bowen University for a program when I ran into Dele Momodu on the campus. I said Aare without thinking about it. I kept saying it over and over.

“He was astounded as well. I then directed Alli Ibraheem, my press secretary, to issue a statement. I never pay attention, but I’m curious why Aare? Most of the time, I don’t understand the meaning and implication of my message right away. Even my ardent lovers don’t understand right away, but a few deep do. “God told me to bestow the Aare Title on Dele Momodu.”

“The inspiration I received convinced me to honor him for free. I was told by God that I needed him to take Iwoland to the promised land. And I’ve been seeing the effects for a short time before his installation. The Federal Ministry of Works is facilitating the rehabilitation of the Iwo-Ibadan road.”

“I implore him to stay on the path of honor. I have faith in him to help me realize my dream of catapulting Iwoland to a great and enviable height.”