How Oyetola Eulogies The FG for Its Enviro Intervention in Osun 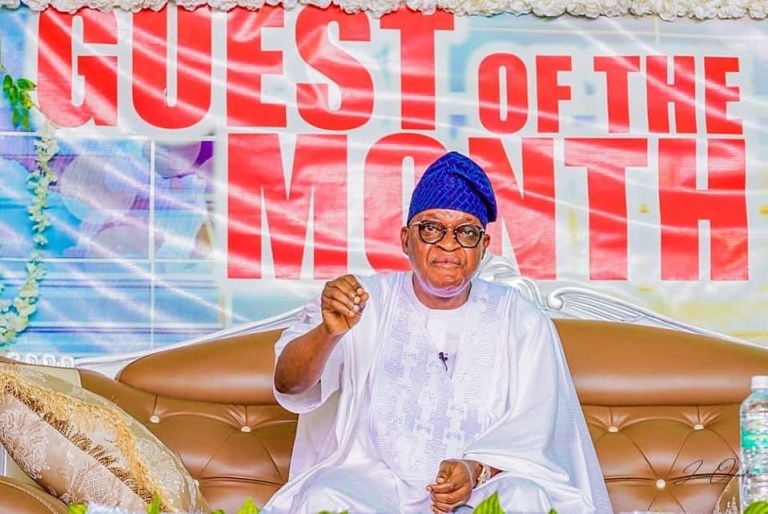 Adegboyega Oyetola, Governor of Osun State, has praised the Federal Government for its ecological intervention in addressing the state’s environmental challenges.

He described the intervention as not only desirable, but also critical to mitigating the risks and dangers associated with all ecological and environmental challenges in Osun.

Oyetola presented the award at the inauguration and handover ceremony for the erosion and flood control works at Agbara Canal in Ile-Ife.

The governor emphasized that the intervention would bring comfort to the community and its surroundings, as well as alleviate the hardships of nearby farmers and road users during the rainy season.

The governor, who was represented by his Deputy, Benedict Alabi, assured the audience that his administration would continue to prioritize issues affecting the general well-being of the people of the state.

Dr. Habiba Lawal, Permanent Secretary, Ecological Fund Office, stated that the project was sparked by a request for urgent intervention forwarded to his office by the state government. And in the meantime, the state government has unveiled a plan to honor 28 of the state’s most distinguished and prominent citizens.

Dr. Charles Akinola, the Governor’s Chief of Staff, revealed this yesterday while speaking to journalists at a press conference on the imperatives of the state’s 30th anniversary celebration.

Akinola stated that the celebration would include an anniversary colloquium on Thursday, September 9, 2021, with high-profile resource persons such as former Osun State Governor Bisi Akande, Sultan of Sokoto, Muhammadu Sa’ad Abubakar III, former Special Adviser to President Goodluck Jonathan on Media and Publicity), Dr. Reuben Abati, and former Nigerian Ambassador to the Philippines, Dr. Yemi Farounbi, among others.

He explained that the anniversary colloquium would be a hybrid event, taking place in both the physical and virtual realms, and that the decision was necessitated by the season’s peculiarities.

According to him, the awardees were chosen by a jury based on their service to Osun State and contributions to global and local society.

“Both indigenous and non-indigenous people who have contributed to the development of Osun State have been meticulously chosen, and there are no age, gender, religion, ethnicity, or tribe restrictions.

“We are confident that this will serve as an inspiration to others to contribute to the advancement of the state,” Akinola said.