If We Don’t Watch Out, We’ll Be Chased Out of Abuja — Amaechi 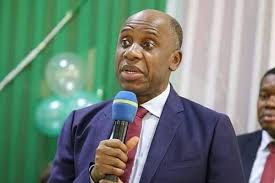 Rotimi Amaechi, the Minister of Transportation, has accused Nigeria’s political elites of squandering the country’s resources, warning that impoverished Nigerians will one day drive them out of Abuja.

He also stated that secessionist agitations in the country should not be viewed as a problem, citing economic deprivation and injustice as reasons why some groups are calling for the country to break up.

Amaechi stated that both northern and southern Nigerians are deprived, adding that the injustice did not begin with President Muhammadu Buhari’s administration.

In an interview, the minister stated that the president is doing everything possible to get the country back on track.

“In the past, when I was the speaker and later the governor, I said we’d wake up one day and the young boys we’d deprived would chase us out of town,” he explained.

How many big men are still alive in their respective states? They’ve all fled. “Everyone is here in Abuja, which is safe because the president is here.” The boys will be brave one day, and we will be on the run.

People claim that secession is the issue, but it is not. Secession is motivated by two factors: economic deprivation and injustice. Did the injustice begin with this administration? Because I was present, we must address the situation.

He did, however, warn those in charge of the insurgency to be cautious, “because the day the poor people of these regions come together as a people, all of us will run.”

“They can try all they want to divide the country, but the day the poor men band together, we will flee,” he said.

The minister also stated that there is no need for Nigerians to band together if the country does not diversify its economy and build the necessary infrastructure.