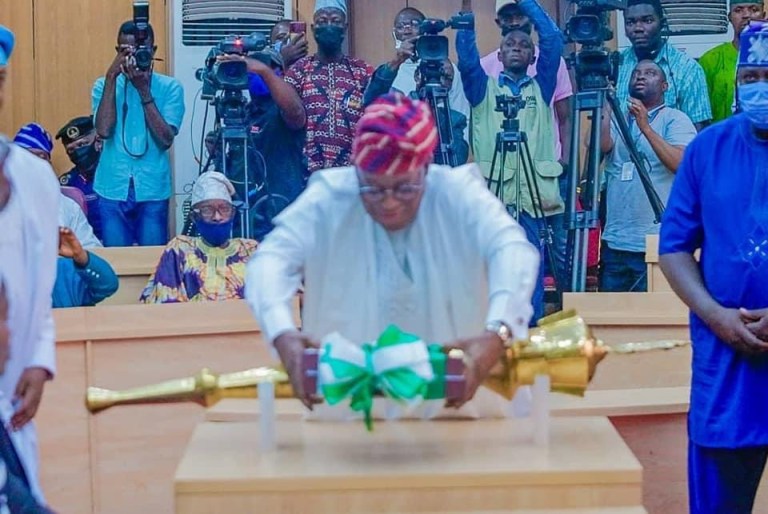 Even as the Governor reaffirmed his Administration’s commitment to long-term development and economic growth in the state,

The Appropriation Bill details revealed that the larger chunks were earmarked for infrastructure, education, and health sectors, with agriculture also receiving its fair share.

The draft Budget, dubbed “Budget of Sustainable Development,” is based on the Administration’s commitment to providing a conducive living and working environment for the people of Osun.

According to the Appropriation Bill, a total of N26,609, 441, 740.00 went to education, over N19 billion to infrastructure, about N16 billion to health, and about N7 billion to agriculture.

Oyetola, who presented the 2022 budget to lawmakers, stated that the budget was aimed at further cementing and pursuing the policy thrust of his Administration, as well as consolidating various achievements so far recorded in each sector of the State’s economy.

Governor Oyetola stated that, given the current economic realities, the primary focus of the budget would be aggressive improvement of the Internally Generated Revenue drive to ensure optimum performance in the coming fiscal year.

He stated that workable strategies have been put in place to increase the State’s revenue without imposing undue burdens on residents.

The Governor also stated that all General Hospitals throughout the state would be rehabilitated, and he hinted that the government would begin massive road construction in 2022.

“All existing on-going road projects are being worked on and will be delivered soon, in accordance with our Administration’s commitment to ensuring that there are no abandoned projects in the State.”

“This administration has also begun massive road construction and rehabilitation projects throughout the state.” Some are finished, while others are still in progress.

“Work on Lawyer Atanda Road in Iwo will begin in a matter of days.” To name a few, work on the Ila-Arandun-Kwara Boundary Road has begun, and a network of roads in Ikire and Ife is currently being procured.

“All of these are intended to facilitate the ease of doing business, the easy and smooth movement of citizens, and the transportation of farm produce to urban markets.

“I want to reassure the people of Osun that more notable road projects will be awarded as part of the government’s efforts to improve the socioeconomic activities of the state’s residents. This is also in line with the current administration’s goal of providing adequate, high-quality, and equitable services to the people of Osun.

“Over the last three years, we have laid important foundations for the development of our State’s economy with various developments in infrastructure, security, environment, and major improvements in the Ease of Doing Business and growing our Internally Generated Revenue,” he added.

“We must now focus on maintaining the momentum of building on our previous accomplishments and, as a result, delivering accelerated economic growth and development for all.”

“As a state, we have a clear vision of the future. Our long-term goal is to achieve inclusive socioeconomic growth, which is anchored in our 10-Year Osun Development Plan (2019-2028). Our development strategy is built on four pillars: economic development, infrastructure development, human capital development and security, and environmental sustainability.

“To that end, we commit to strengthening the foundation for revenue diversification and economic sustainability by focusing on Agriculture, Mining, ICT and Innovation, Culture and Tourism, and Creative Economy, while ignoring other critical sectors such as Infrastructure, Water and Sanitation, Commerce and Industry, Education, and Health.

“In a broader sense, our Administration’s central focus is to make Osun a prosperous state in a secure and sustainable environment through pragmatic, transparent, accountable, and inclusive governance.”

“Another innovation of our administration is the conscious use of arts and culture to re-energise our state economy,” he said of tourism. In accordance with this, the State government has mandated the wearing of ‘Adire Osun,’ particularly by Cabinet members and other political functionaries in the State on Thursdays. The idea is to pique people’s interest in promoting our culture and to encourage others to do the same, thereby boosting our local economy in the long run. The process of identifying local producers of ‘Adire Osun’ is ongoing. Our intention is to connect producers with financing in order to increase production in order to meet the expected surge in demand as a result of this policy announcement.

This will be aided by the government’s intervention in the near future to open the ‘Adire Osun’International Market.

“We have not given up on promoting our cultural activities in the state.” Although we are not yet where we should be, we are making steady progress in our efforts to turn our tourism sector into a revenue generator for the state. For example, we went from generating less than two million naira (N2m) in three years (2017, 2018, and 2019) to generating more than twenty million naira (N20m) in 2020 alone, and we have already made over ten million naira (N10m) (N10m). “We’re determined to improve it in the coming years,” Oyetola added.