Shocking: How Couple Dead After Dinner In Osun 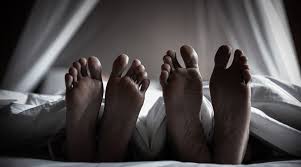 There was an uproar in the Ireti Ayo area of Ilesa after a couple identify as, Eso Olasunkanmi and Eso Fisayo, were discovered dead in their dining room.

The couple was discovered lifeless in the room, according to SP Yemisi Opalola of the Osun State Police Command, who confirmed the incident on Sunday.

However, it was learned that the couple had dinner on Friday night, but the circumstances surrounding their mysterious death are still unknown.

Wale Banjo, a local, said no one knew what happened to them, but they were seen earlier on Friday, October 1 due to the public holiday, only for their bodies to be discovered later that evening.

Opalola revealed that the bodies had been taken to a hospital for autopsies in order to determine the cause of death.

“The bodies of the couple have been taken to the hospital for autopsies. The outcome could help us solve the mystery surrounding their death.

“At the moment, I cannot reveal what killed them until after the autopsy,” she added.