Why, and How Ooni Incentivize 2,000 Fashion Designers in Osun 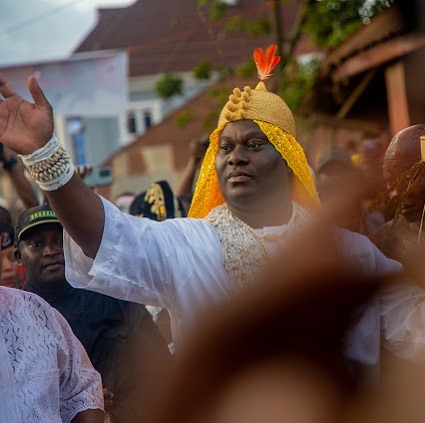 The Ojaja Philanthropist Initiative has empowered over 2,000 fashion designers as part of the Ooni of Ife, Oba Adeyeye Ogunwusi, Ojaja, 11-point agenda to help the less fortunate.

The Royal Father expressed his gratitude for setting the pace at an empowerment session held at his palace in Ile-Ife on Monday.

Trophy International Breweries, Ilesa, was praised for financing the Ojaja Philanthropist’s Initiatives, through which the least fortunate were educated and given skills training.

He was constantly electrified, he said when supporting the less fortunate in the hope of providing them a better future.

“I’m content and happy today because what gives me oxygen is to aid the oppressed, both academically and non-academically.

“I’m always ecstatic when I witness impossible things become attainable when the oppressed are lifted and shown that there is hope for the hopeless.

“Under the umbrella of Ojaja philanthropists’ projects, we have many vocational schools, one of which is the Ojaja fashion training schools, from which about 2,000 students have graduated,” he explained.

The efforts of the brewers, according to Oba Ogunwusi, cannot be overstated because they have always supported the sponsorship of vocational students by empowering them to be self-sufficient.

“We’re doing this to prepare them for a brighter future,” he said. “No one knows what they’ll accomplish in life; some will become presidents, governors, and so on.

“He asked well-intentioned Nigerians to emulate this good deed by donating their wealth to the less fortunate, stating that the government alone cannot help the citizens and that all hands must be on deck to help them.

“You can labor alone, but you can’t enjoy your wealth alone; making a positive difference in people’s lives would indeed edify God and purify society. Ooni added.

Mr. Adewole Lawal, Corporate Affairs Manager of Trophy International Breweries in Ilesa, praised the Ooni for prioritizing the youth’s future by empowering them in numerous ways.

The breweries’ motivations were to have an impact on people’s lives in society to eliminate criminality in all nooks and crannies, because “an idle hand is the devil’s workshop.”

Mr. OlaOluwa Adeyanju, the Coordinator of the Ojaja Fashion Training Institute, praised Ooni for his efforts in giving voice to the voiceless.

Adeyanju, who stated that the Ooni has done it before, is doing it now, and will continue to do it in the future, advised the recipients to make use of the opportunity to better their lives and ensure that they helped others who were less fortunate.

Barakat Isiaka, one of the graduates who talked to reporters, thanked Oba Ogunwusi for training them for a year at no cost and empowering them to stand on their own at the end of the course.

“We all appreciate our Royal Father’s efforts in improving our lives and providing us hope for the future. We pledged that we would not abuse the privilege bestowed to us and that we would return the favor in the future,” she stated.