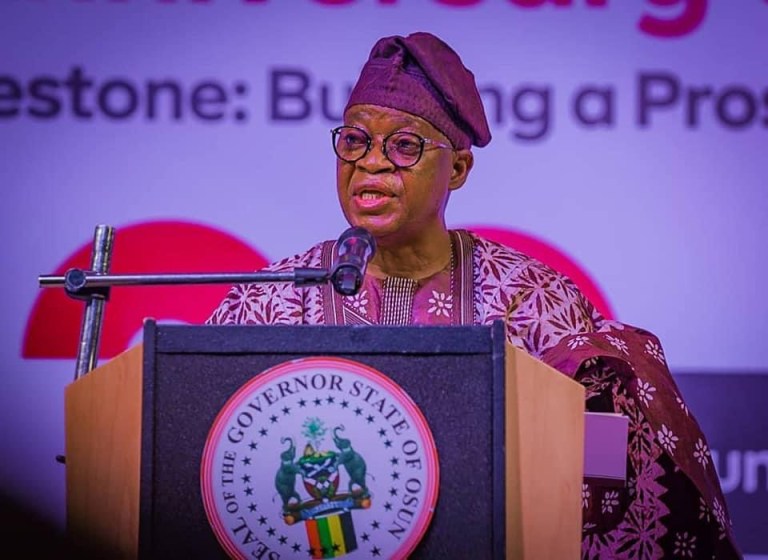 … Speaking first, was the Sultan of Sokoto. “Why I’ve Closely Followed Governor Oyetola’s Programs Since Elected”…

… Also, Ooni added; “Why Osun Is A Better Place Today Than It Was When It Was Created“…

Mr. Adegboyega Oyetola, Governor of the State of Osun, congratulated the citizens of Osun, describing the State as a full-grown entity that had overcome its challenges with stoic resilience over the years of its existence.

On the importance of the colloquium to the State’s 30th anniversary celebration, Oyetola stated, “This Colloquium has been designed as the intellectual arm of our State’s 30th Anniversary to interrogate the performances of the State so far, examine possible gaps, and project for a sustainable future that we all crave for as a people and desire to bequeath to our posterity.”

“As an Administration, we have convened this Colloquium to celebrate our shared values and collective resolve in delivering the Osun that we desire, as well as to give voice to our dream of pursuing our Development Agenda, which is our strategy and road map for putting our dear State on the path of sustainable development.

“We are confident that, just as the foundation laid by our forefathers 30 years ago earned us a viable place in the national and international space, our decision to lay bricks of modern governance structures will build a prosperous and sustainable future.”

“This 30th Anniversary marks the end of old era and the start of new: the beginning of sustainable governance and development, the beginning of a new era for a generation of Osun citizens who will ride on the wings of knowledge, technology, and entrepreneurship to realize their potential, close the door on unemployment, create wealth, and radically transform the State’s economy.”

Despite a lack of funds, the panelists took turns praising Osun’s sustainability in infrastructure, health, security, and education.

He stated that no other state in the country has as many urban centers as Osun.

“What is required is a focus on the development of those urban centers. Once this is completed, the migration from these centers to cities like Lagos will be drastically reduced.

“Population is a necessary component of growth and development. That implies that the development of those urban centers will aid in the retention of citizens and the return of those who have already migrated. Businesses will expand, and Osun will remain the most prosperous state in Nigeria.

“I must commend the governor for his efforts thus far. People have referred to him as a gentleman governor, but I prefer to refer to him as a positively gentle governor because he is gentle in a way that promotes growth and development.

“However, here is my proposal to the governor: Let us build more inner-city roads. I understand that resources are limited, but you have already accomplished the unthinkable with what you have. Except if we want to lie, some of us did not expect what you did. We expected it to be more difficult. We understand that resources are limited, but please allow us to do our best,” he said.