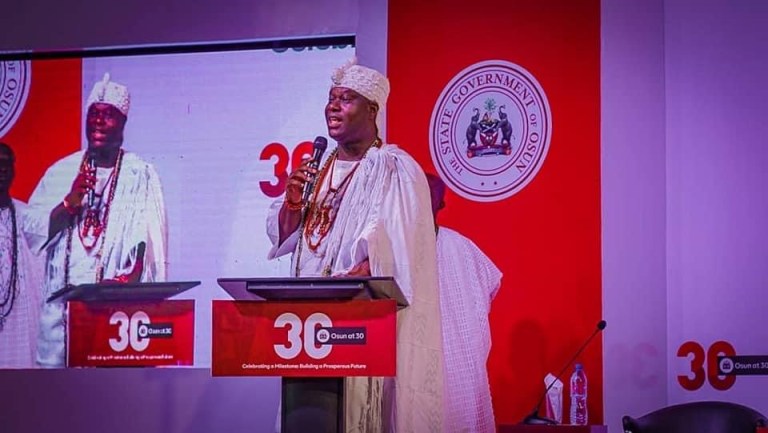 … Speaking first, was the Sultan of Sokoto. “Why I’ve Closely Followed Governor Oyetola’s Programs Since Elected”.

Speaking at the colloquium, His Imperial Majesty Adeyeye Enitan Ogunwusi, Ooni of Ife, paid glowing tributes to the State’s past and present leaders, adding that Osun is now better than it was at its inception.

“Osun is a better place today than it was when it was created. This is demonstrated by what we are doing here today. The journey of 30 years began with the efforts of some people, and we thank the founding fathers, past administrators, and incumbent governor for their contributions to the growth and development of Osun.

“Osun is greater than any individual, and it has become necessary to emphasize this fact in order for our people to be cautious not to allow politics and other interests to disintegrate us,” Oba Ogunwusi said.

In his Keynote Address, a former governor of the State, Chief Bisi Akande, praised the State’s founding fathers and past leaders for achieving an optimum community and laying the groundwork for the State’s prosperous future.

Former administrators in the State, General Leo Ajiborisha (rtd. ), Captain Anthony Udofia (rtd. ), and Theophilus Bamigboye, in separate remarks, congratulated the government and people of the State on the anniversary, urging all to continue to sacrifice for the State’s growth and development.