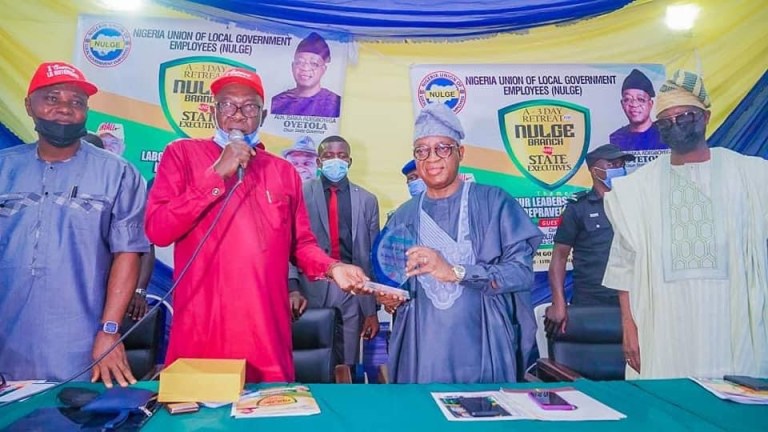 Ahead of the next year’s governorship election, different categories of workers in the State of Osun are already taking their turns to endorse Governor Adegboyega Oyetola for another term.

On Wednesday, workers under the auspices of Nigeria Union of Local Government Employees, NULGE, openly declared their support for the Governor, announcing publicly that they would “vigorously campaign” for his victory.

Their support is coming barely a week after teachers, under the auspices of the Nigerian Union of Teachers, NUT, also endorsed the Governor, using the platform of the World Teachers’ Day.

Comrade Kehinde Ogungbangbe, Union President, said at a 3-Day Retreat organized by the Osun branch of NULGE, that since the arrival of the Governor three years ago, workers’ children have not suffered any kind of deprivation because salaries are now paid regularly.

“Mr. Governor, Sir, I want to express my heartfelt gratitude for having you as our father and Governor.

Your humility and kindness have brought peace and stability to our union and the state as a whole. Osun State is no longer making headlines for the wrong reasons. We are delighted to be associated with you. The Almighty God will always be with you.

“Your Excellency, we are well aware of the upcoming governorship election in the State in 2022.” We are not blind to the lies and cries of many opponents, both within and without. We are also aware, Your Excellency, that God, who gave you victory against all odds in 2018, is still on the throne. Your God is not dozing off. We will stand by you and vigorously campaign for your victory next year,” the Union leader added.

In his remarks, the National President of the Union, Comrade Akeem Ambali, who bestowed the honor of Patron of Union, South West Zone, and the award of Labour-Friendly Governor for the South West on Oyetola, stated that the workers in the State are not scum. He stated that they would lavishly repay the Governor’s gesture during the election.

He praised the Governor for putting an end to what he called “part-payment of workers’ salaries,” and urged him to stay focused because workers would become his foot soldiers, helping to correct some of the misinformation spread by the opposition.

Earlier, the Chairman of the Osun NLC, Comrade Jacob Adekomi, praised the Governor for consistently putting a smile on the faces of workers in the state, as evidenced by the regular payment of salaries and pensions, among other emoluments.

“Anyone following the trend of things in Osun concerning the welfare of workers will not but give kudos to Governor Oyetola for redefining, repositioning, and transforming the lives of workers,” Adekomi said, declaring workers’ support and solidarity with the Governor and his Administration.

“Any worker who follows this trend, particularly between 2015 and 2018, in terms of what we earned then versus what we earn now in terms of full salary payment, will agree with me that there is no need to change the winning team.” Our collective hope has been rekindled and restored by the Governor.

“If a man who has helped us, put a smile on our faces, and relieved our pains is asking for our support, there is no need to negotiate his return because he has made us proud, and we are determined to ensure his re-election.” We are prepared to provide him with unwavering support for him to be re-elected for a second term. “Regardless of what people say, we will canvass for him because when Osun workers were suffering, we were the ones condemning it,” Adekomi stated.

Responding, Oyetola, who opened the Retreat, thanked the union leaders and members for the honor bestowed upon him and charged Local Government staff to work with Council chairmen to develop the economy at that level.

“I’ve been asked to declare this Seminar open.” I had no idea I was a winner. I appreciate the recognition. It will undoubtedly motivate me to do more.”

Speaking about the Retreat’s theme, “Labour Leaders and Unionism in a Depraved Economy,” Oyetola said it was a call to workers and local government officials to demonstrate to the world that they can deal with challenges and turn the State’s economy around.

He went on to say, “Revitalizing a depraved economy requires knowledge, strategy, and political/collective will.”

“In light of this, labor leaders and unions must rally their members to work with the government to find a solution.” Local Government Unions must organize themselves into co-thinking chambers and steadfast implementers of policies for the common good.

“Our Administration has demonstrated the capacity and resolve to turn the State’s economy around through the implementation of workable economic strategies, including the convening of the Economic and Investment Summit, the unleashing of infrastructure architecture to stimulate socio-economic development, the use of transparent governance, and a strong political will.”

“Within two years of convening the summit, we have identified four business and trade concerns, with several more on the way.” We are also positioning our critical sectors, such as agriculture, tourism, and mining, to radically transform our economy and make good on our commitment to make Osun the South West’s economic hub.

“Osun workers have played important roles in these initiatives.” I urge you all, as local government employees and officials, to extend the same level of cooperation and commitment to local government chairmen and councilors to transform the economies of local governments and, by extension, our dear State.

“Let us all join hands to strengthen our conviction that it is possible to deliver prosperity and good governance in a democracy without inflicting additional hardship on the people in a depraved economy.”